Showing posts from September, 2017
Show all

https://youtu.be/h4ShthuJKrU A small excerpt from close to the beginning of my Remote Presentation for the members of the Computer Users Group of Redding, CA ( http://cugr.apcug.org/ ) If you live in the area, this is a great club to join.
1 comment
Read more

Cashing in on the Ccleaner Hack 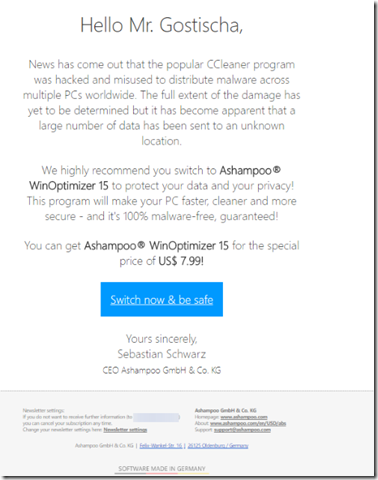 It certainly didn’t take long: I wonder how many other will see the hack as an opportunity  to pedal their wares.
Post a Comment
Read more

By now, you already know that I enjoy receiving my free Metformin via Blink Health ( https://www.blinkhealth.com/i/6SB2HB?utm_medium=c ) I fill my prescription at Smith’s ( https://www.smithsfoodanddrug.com/ ) where I accumulate point to get a reduction in the price of the gas I purchase. So I pay nothing for the Metformin and get a 50 point gas credit to boot. I’d call that Double Savings . It’s a great day. Hope yours is also.
Post a Comment
Read more

September 18, 2017
Here is some detailed information on the recent vulnerability discovered and mitigated in Ccleaner.exe. Ccleaner is a very popular junk removal software. Ccleaner is a product of Piriform and Piriform was recently purchased by Avast Software. Here is the information just posted by Ondrej Vlcek the CTO of Avast: "I just had a chance to read this thread and I'm a bit horrified as I think that there's quite some misconception about what actually went on. First of all, the bottom line is: to the best of our knowledge, no harm was done to any CCleaner users as the threat was removed before it had a chance to fully activate. This is really not about downplaying the issue. This is a statement based on a pretty thorough analysis, partially shared below and partially still embargoed because of the ongoing investigation. Now, some facts: - Avast acquired a company (Piriform) which was in the process of being hacked. We have good evidence that the attack started at least seve
1 comment
Read more

See all of the photos https://photos.app.goo.gl/4Y7wKiSi4ZuATaSq1 Another enjoyable presentation for the members and guests of the Big Bear Computer Club . If you live anywhere close to Big Bear Lake CA, this is a great club to get involved with. If you need help with your computer or smart devices, you can get FREE help if you're a member.
Post a Comment
Read more

A short excerpt, close to the end, of a Remote Presentation (Webinar) for the members of the ICON PC Users Group in Brentwood LI, NY https://youtu.be/BXXLvDifxkQ As you can see, webinars or remote presentations don't need to be boring. (It's still more fun to be there in person.)
1 comment
Read more 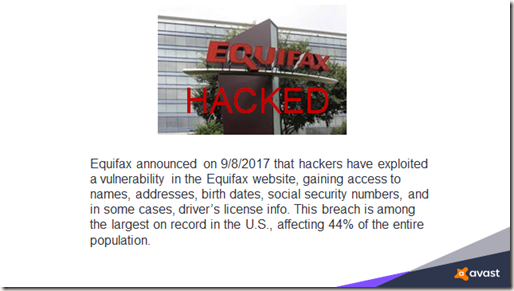 https://photos.app.goo.gl/9bKZ8WOrUj4KaD0v1 The PCUG in Trumbull was a very lively and involved club that asked a lot of questions both during the presentation and during the Q&A session that followed the presentation. If you live in the area, it's a club worth joining.
Post a Comment
Read more
More posts